So it is time to write V.E. Schwab, the author of the Shades of Magic-Series, a letter.

To explain why I love her books, whose character is my absolute favourite and why I could kill her for the last chapter of “A Gathering of Shadows”.

I have to make an important point in this letter: I ABSOLUTELY LOVE YOUR BOOKS!
They are awesome, unique, fantastic and everythin I ever wished for!
But let me explain why we – the readers – are so entitled to this series which stormed our hearts and won’t let our feelings go.
And although you let your readers suffer from heartbreak several times and don’t allow us to be happy with the characters for just one splitsecond, we love these books? Why? Why do we love it so much, even though it hurts us?
Is it some kind of masochistic behaviour?
No! (YES!) But let me explain it in detail: 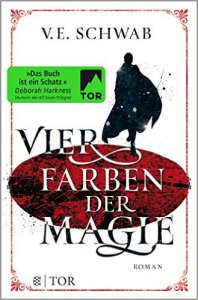 Whenever someone comes to speak of an awesome fantasy world, one of the first things to come to mind is the complexe and beautiful world of the Shades of Magic-Trilogy!

Not two, but four parallel worlds that are connected by magic or the absence of magic.
There is Red London, which thrives with magic and is glowing everywhere with it.
Home to Kell the Antari and prince Rhy, Red London ist perfect for magic and the everything connected to it.
There is White London, which has a dark and twisted form of magic that just doesn’t feel right. Ruled by gruelsome twins, White London not just is immoral, it is doomed.
There is Gray London, defined by the absence of magic and totally normal. Home to Delilah Bard, the best thief in the world, it contains enough threads and mysteries without magic and is just and triste as White Londo is dead.
And there is Black London, which was destroyed by magic. Completely dead. Or so it seems beause a constant threat is emerging from this world…

It is no secret that I absolutely love magic! And why? Because it’s so magical! (Pun absolutely intended!)
Normally I just want to have normal elementals who control fire, earth, water and air. The magicians in the Shades of Magic-Series do exactly that but the point of magic, the absolute feeling of it, the stream of magical powers, is unique in this series. Everybody can feel that this is something very special and very dangerous.

The philosophies containing magic and the different explanations of it are awesome and just so innovative that I want to live in this world. RIGHT NOW!

Also the idea of affinities to some kinds of magic lets me shiver with excitement because it feels so damn real! I WANT TO HAVE THIS RIGHT NOW!

Kell is an Antari which means that he has an affinity for every element and for bone magic! He is considered one of the most powerful magicians in the multiple worlds and the magic has left its traces: Kell has one eye that is entirely black. As every Antari has.

But Kell with his constant frown, his cool coat that has endless sites and his endeavor not only to serve his kingdom and his prince but also to be truly free, is caught in between numerous worlds and conflicts.

He is urging to set his magic free and although the magic in his eye seperates him from all other inhabitants from his favourite Red London, one girl manages to see behind the holy facade of a lonely boy.

Kell is bone dry and an introvert but so so so lovable because he cares about his brother and his kingdom, wants to do the right thing and is obviously A HELL OF A MAGICIAN!

Lila is the coolest and best thief/magician/pirate/world saver I had the pleasure to get to know. I like her with my heart and my soul.

Her cool moves, sly smiles and the way she always manages to get what she wants are incredible!

She loves the colour black (totally awesome!), wants to be the best at everything she does and runs right in the fight instead of running away.

Lila does what she wants and mixes up not just Kells live but the whole parallel worlds when she decides to make more of her live than stealing in Gray London.

(And her attitude is giving me the chills! Couldn’t care less and bitch don’t touch me could be her slogan for life!)

Oh well this is so obvious. More than obvious.

The two spend the whole first book together and have the slightest but coolest chemistry of them all! I love their teasing, their fighting and of course that they save worlds together!

Kell and Lila were seperated during the second book and I immediatly missed everything of them and my heart bled tears when they saw each other again!

They know that they want each other but what fun would it be if there isn’t a constant thread hanging above their heads? Right! No fun at all!

So they seem to need the danger and the near-death. Which is kind of cool when you think of it.

IT CAME OUT OF NOWHERE BUT I LOVED THEM IN AN INSTANT! THEY HAD WAAAAY TOO FEW SCENES IN “A GATHERING OF SHADOWS”! Waaaaaay to few!

They are perfect together, a couple you wouldn’t expect but fits just perfect once you see them together!

And I was shocked, happy and totally euphoric when I first saw them together!

Need more of it! Pleeeeaaaaaase!

So I think it has become clear that your books are one of the best!

And I hope every reader can now see why and reads everything as soon as possible!

Here you can see the other blogs participating in the #ShadesofMagicTour: